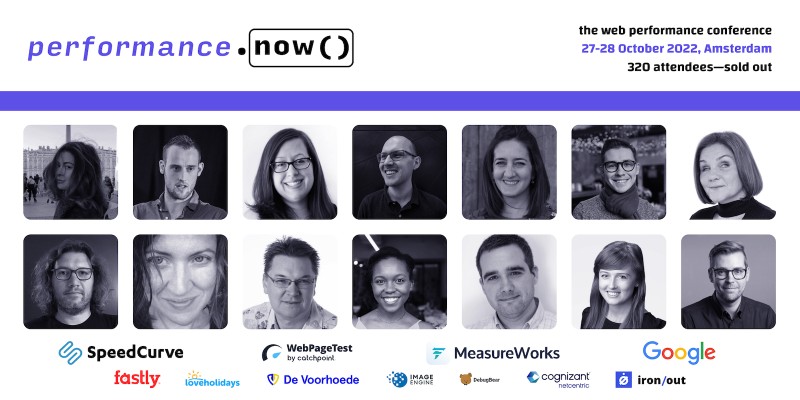 The PerformanceNow() which was held on 27-28 of October in Amsterdam, The Netherlands and is a technical conference aimed at performance engineers and performance-minded people and as such the CDN Alliance was there too, represented by Thijs de Zoete from our board.

Companies that were attending were primarily companies with a focus on business-2-consumer websites and apps in retail, e-commerce, digital marketing and related as well as companies that relate to Cloud, CDN, browses and other vendors. The event was two days of talks with in-between quick talks with other people at the event. The following talks were certainly interesting:

Next to listening to the sessions we have spoken with all kinds of companies, many of whom showed interest in the initiatives the CDN Alliance is organizing. It was great to speak with Nic Jansma from Akamai who just published his article on User Agent reduction that is in line with our own observations of the market. Also was great to speak to people from Gcore, Mozilla, Google, and ImageEngine. We hope to see you all next year!

More importantly there was a great crowd, all connecting with each other and talking about CDN, and the speaker sessions received great feedback from both other speakers and attendees.

The fact that everybody knew about the CDN Alliance when Mark asked the audience, was confirmation that we are on the right track. A new edition of the Content Delivery Summit is already scheduled at November 14th as part of Streaming Media West.

We use cookies on our website to give you the most relevant experience by remembering your preferences and repeat visits. By clicking “Accept All”, you consent to the use of ALL the cookies. However, you may visit "Cookie Settings" to provide a controlled consent.
Cookie SettingsAccept All
Manage consent

This website uses cookies to improve your experience while you navigate through the website. Out of these, the cookies that are categorized as necessary are stored on your browser as they are essential for the working of basic functionalities of the website. We also use third-party cookies that help us analyze and understand how you use this website. These cookies will be stored in your browser only with your consent. You also have the option to opt-out of these cookies. But opting out of some of these cookies may affect your browsing experience.
Necessary Always Enabled
Necessary cookies are absolutely essential for the website to function properly. These cookies ensure basic functionalities and security features of the website, anonymously.
Analytics
Analytical cookies are used to understand how visitors interact with the website. These cookies help provide information on metrics the number of visitors, bounce rate, traffic source, etc.
SAVE & ACCEPT